I have been on a t-shirt making spree. I wanted to make another one for my oldest granddaughter but only had one shirt. This t-shirt was dark gray and boring so I decided to bleach it.
Of course I didn't take a photo of the shirt before I sprayed it with bleach, but you can see the shape and original color around the edges. I put an old towel inside the t-shirt to protect the bleach from going to the other side, but apparently it did soak through a little.
Once the towel was inside, I poured bleach into a spray bottle and just sprayed. I let it sit for awhile until it got to the place where I wanted it. Then I ran it under cold water to stop the bleach from continuing to...well...bleach. Once it dried, I sprayed more bleach in the center to make the center even lighter.
I also snipped a little "v" under the center collar. Not too low, but just to add a little extra grunge to the shirt.
I purchased the Freddie Mercury SVG from Apex. It came in a set of five images for only $2.99. I added the words by searching in Images in Design Space. I've been doing this a lot since I can find some cool words that have a unique font and/or shadows. Most times I have to remove other words to select only the words I want. For instance, this "Rock You" was actually "You Rock" so after ungrouping and then duplicating a layer of the "image", I used the contour tool to remove one of the words - then rearranged the two new single words to create the "Rock You" word. Be sure to subscribe to my YouTube channel to see me do this in action.
I sliced the silver glitter which was the top layer from the shadow so I didn't have to layer the HTVs.
This next trick I learned from Holli Mostella. I layered the HTV together but ironed them on one layer at a time. So below you see the two layers on top of each other. I wanted to adhere the silver glitter first since I knew it would need more time under heat (I checked the Heat Guide). I didn't want to guess where to put the silver glitter HTV, so by laying them on top of each other for placement first allowed me to know exactly where to place the glitter HTV. 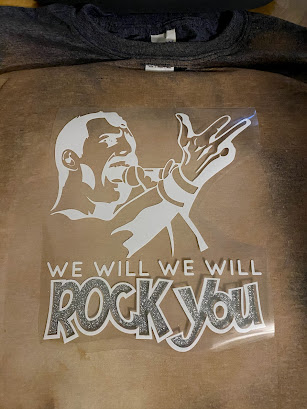 I peeled up the white HTV sheet & removed it before pressing the glitter HTV. 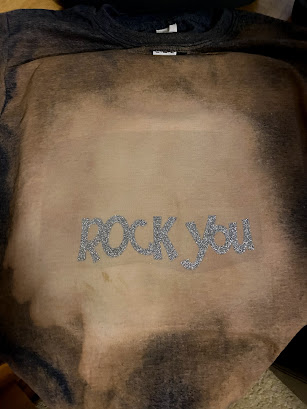 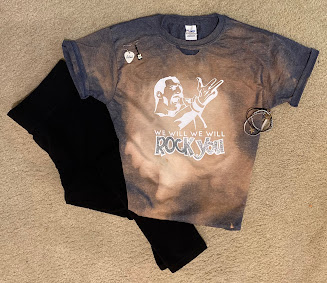 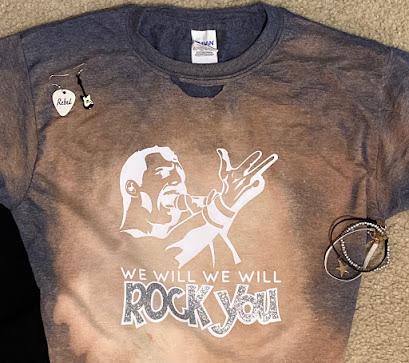 My daughter and I are trying to create pleasing photos with props. It's not as easy as it looks. LOL But it is fun. We wanted a rock n' roll feel and she pulled out these old earrings from her jewelry box that she had since middle school. LOL
Posted by Dorlene Durham at 8:00 AM