Week Four is done
Some of the prompts were a little hard to follow, but it's good to push yourself when creating.

Prompt #25
Song
You'd think I'd do a card with one of my favorite songs but I took the easy way out and used this stamp from Unity. 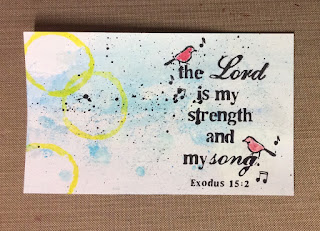 The blue background was a blot-off of some watercolor paint and I added some black paint splatters, yellow stamped circles using the Lila Grey Elements 2 stamp set and colored in the birds on the stamp from Unity.  Easy 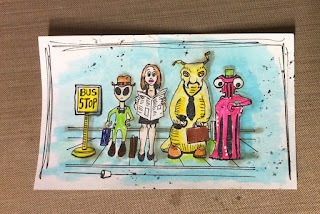 This cute stamp was from Rubber Paws.  I haven't had the chance to use it but it was the first thing I grabbed when I saw this prompt.  Spritzed the card with water and then colored in the images with watercolor markers.  Added shadow and black marks around the card.  HA HA HA!  Love this stamp!

Prompt #27
Motel (I changed to Crayons)
I was stumped on this one so I just did some mixed media on the card and then found this cute sentiment stamp that my friend Cristina bought for me. 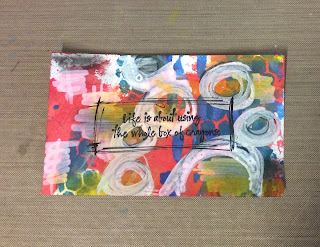 Prompt #28
Cat or Dog
This card was simple as I just put black watercolor paint on my craft mat, added water and then smooched the card into the paint.  Then added some white splatter.  I also added some watered down yellow acrylic paint to shadow the dog stamp. I had this sentiment stamp from Rubber Paws and never used it.  I think it's hilarious!  The poodle is also from Rubber Paws. 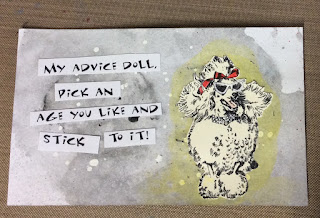 That completes week #4.  This one was a little harder to complete but I still plan on getting to Prompt #61.
Here's a photo of all the cards so far: 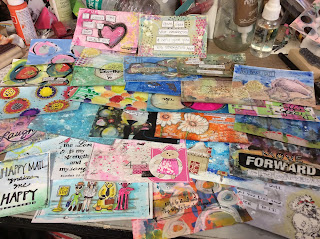 Posted by Dorlene Durham at 7:30 AM