Last year during Oktoberfest, a local fundraiser, I won the door prize which was one of each 120 beers that were served during the event. Yup, I hit the Mother Lode!

After the first few beers were opened and tossed aside, I realized that I wanted to keep all the bottle caps for something.  I wasn't sure yet, but I knew that I'd think of something.  So...120 beers later and some extras, I had them layered on this old lazy Susan that I bought years ago at a thrift shop.  They were in there loose and I finally decided to put them in permanently. 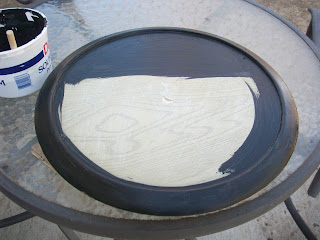 I should have taken the photo before I started painting it, but I did think about it 1/2 way through.  As you can see it was an ugly fake green wood paneling.  I painted it with black chalkboard paint.
Then I glued the bottle caps in some sort of order. 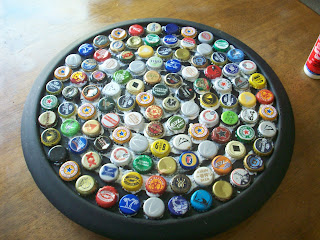 I must confess, about 1/2 way through I realized I didn't leave spaces between the caps for the grout.  DUH!  So I took off a few and just sort of adjusted them - nope I did not measure any distance - I know it's not very professional but hey, I'm not a professional grouter. 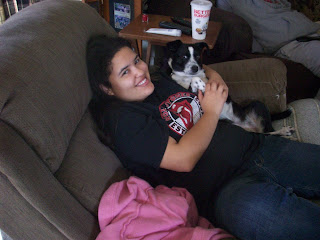 Took a break for the glue to dry...Hey there Carly and Gracie :) 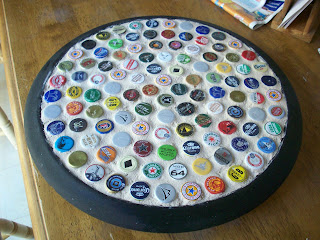 Don't look too close because you can see where some grout is not as full as other spots but I literally JUST barely had enough of it and I was scraping it everywhere to complete it.

I can't wait to show this off at the next Durham party!

Posted by Dorlene Durham at 9:57 AM