It's Been A While

Even though it's right on my bedside table, I hate to admit it, but I haven't opened my bible in a long time. I rarely stay in my bed long enough to grab something to read and it's one of those "out of sight...out of mind" things. (Not very Christian-like but hey if you can't be honest in your own blog, where can you be?) So, the other day like I always do when I read my bible, I said a prayer and then opened it. It opened to 2 Chronicles - read some versus and thought, WHAT? Then I read the introductory & felt so much better about what I read.
The chapters mention names - giving some history of the kings, etc. Nothing in particular. But the intro said the same thing I was thinking. The point is the more faithful the person was, the more he was noted in the Bible and in more detail. In other words, he found favor in God's eyes.  Sort of like a squeaky wheel but in a good way. I like that! 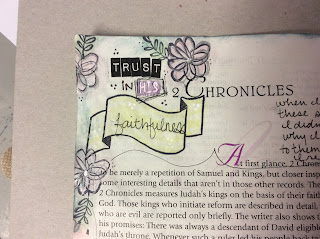 I did this simple bible journaling in the left side corner.  I was going to throw out the banner stamp but before I did, I cut out the sentiment that was in the middle.  I decided to keep it afterwards and I'm so glad that I did!  What a great versatile stamp!  The flowers are from Michael's dollar stamps and the letters for TRUST are Tim Holtz letter stack.  Just some simple water coloring from my water color pencils and done!