Round One: What does sunflowers & sushi have in common? I had a request for an anniversary card from my daughter's friend incorporating sunflowers & sushi. Whoa! I had to really think about how to make this work. I felt like I was on one of those competition shows where you have to mesh random things together to make a project!
I went to Design Space to search sunflowers. I wanted something whimsical to match the sushi die cuts I already had. I used the Walk In My Garden image set for the full sunflower and two flower heads. (although the final project, you can't see the stem or leaves from the full image.)
As I was fiddling around with all the elements, I just wasn't feeling it. Then I remembered that my daughter has sushi Washi tape. So...I grabbed those and decided to use this instead of the sushi die cuts.
Originally, I had a brocade look patterned paper for background which was too heavy for the overall feel so I grabbed this small dots paper from a 6x6 pad in my stash. The sentiment is from FSJ, swiped glitter pen around the edge & added some tiny pearls plus the one red enamel heart. 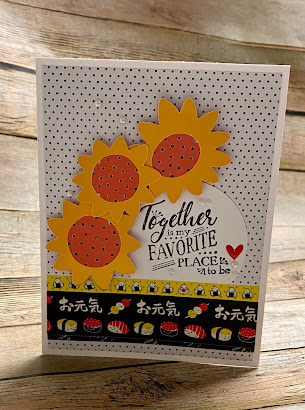 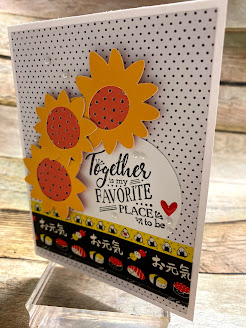 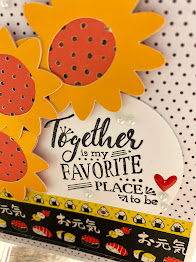 Everything color coordinates. I didn't want it to be too amorous since it's a first year boyfriend/girlfriend anniversary. Good news...she loved it!
Yup...I beat Round One of the competition! LOL
Posted by Dorlene Durham at 9:29 AM