December Flower of the Month

Woo Hoo!  I'm back in the Command Center at least part time.  My foot still throbs when leaving it down for too long, but at least I can do some things.  I've been working on the December Flower of the Month from Lila Grey Digi Stamps.  (Click on the box to the right to go directly to the website and Etsy store.)

I had to do some research on Pinterest to get started on this one.  I knew the holly would be a dark green with red berries, but I wasn't quite sure what my background colors would be.  I've mentioned before that I like to start with four colors.  So after doing some tough research (I swear I only got side tracked once or twice...or more), I came up with these four colors:  yellow, green, lt. blue and silver.

I printed the holly on the top left corner on white cardstock.  I also printed the same size holly on regular printer paper to cut out and make a mask.  I recently bought masking fluid on clearance at Walmart for $1.50, but didn't feel like playing with something new this time.

I placed random Christmas/winter phrase stamps on the sheet to start.  I then used a yellow inkpad and sponged closest to the holly; painted lt blue acrylic paint to fill the rest of the sheet.  Added white texture paste and a stencil in random areas around the sheet.

Once that dried, I started on the holly.  I used a green watercolor pencil to add lines on one side of each holly leaf and the edges.  I then used a waterbrush to spread the watercolor around.  I didn't like the end result so I pulled out a green watercolor marker and repeated the steps.  Yes, I liked that much better!!  I used a red marker to color in the holly berries and put crystal effects on top for extra shine. Once dried, I used an alcohol marker in lt. gray to add a shadow around the entire image. 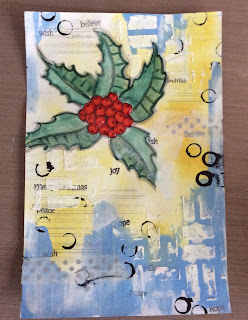 I decided I the background was too bright so I added white gesso over the background to soften it a little.  I also added green ink between the yellow and blue.  I thought it would give a natural color blend when I added the two colors near each other but they stayed  separate. 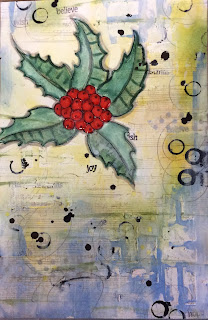 I thought I was done until I realized that I didn't like the black circles on the right side.  So, I used a white reinker and drizzled white ink all over and added some green ink marks using the ink pad. 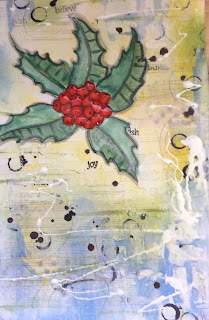 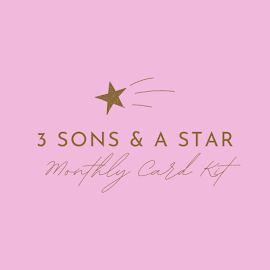